The system provides video support for the 13 schools in the district, as well as offices, a community center, and other district facilities.

The district was having issues with its previous camera system, which was a mishmash of analog and digital technologies that “just wasn’t working well,” according to Manuel Ruiz, CTO at SLUSD. Funded by a bond that generated monies for safety and technology, the $1.5 million system is being used regularly by administrators, who received training through ASG.

Rabinder Mangewala, senior director at SLUSD, says the new system can capture student disciplinary issues on video, so administrators do not have to spend as much time investigating what happened.

“Because the system is so good, investigation time is greatly reduced,” he explains. “It can make a huge difference in investigations.” 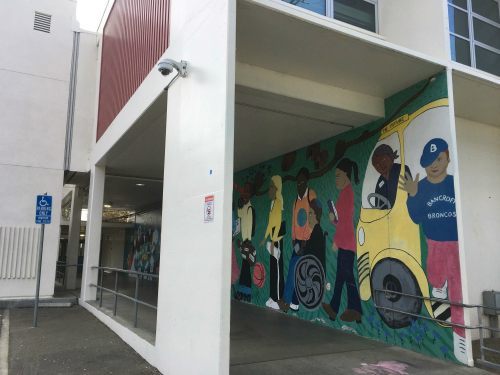 More than 750 new Sony security cameras were installed across the district, including a variety of 1080p indoor models and 4K outdoor models.

School safety was the top priority, of course, but SLUSD had a number of requirements for its new video system, including cameras with long lifespans and a non-proprietary, “virtual friendly” infrastructure that would work with the district’s existing virtual environment.

Plus, neither the cameras nor the software could require annual licensing, as the district wanted to avoid ongoing costs to the general fund. “ASG understood that and obviously came up with a great solution for us,” says Ruiz.

Planning for the project began in October 2017, but new camera deployment did not begin until May 2018. Now, there are more than 750 new Sony security cameras across the district, including a variety of 1080p indoor models and 4K outdoor models.

ASG partnered with Walker Telecomm in Wheatland, Calif., for camera installation, while the district hired a security consultant to collaborate during the design process.

“A public school district is often short of resources,” Ruiz says. “We don’t have extra personnel to manage these types of projects. Being able to find a vendor to provide us with that type of resource was incredibly helpful. Not only did ASG do that, but support was extremely personalized.”

Related: Why FirstNet Is Key to Safeguarding Schools, Colleges and Hospitals

Bandwidth is not an issue, as SLUSD built out its network several years ago to support a massive expansion of services. In fact, its extensive array of security cameras has its own virtual LAN (VLAN), with video traffic separated from other traffic on the network.

“San Leandro was faced with replacing an inefficient CCTV system that had been expanded over the years with an assortment of analog and digital components. The best course of action was to start over — but the new system had to conform to a number of unique requirements,” says Dave Van Hoy, president of ASG. “Our solution provided a reliable and secure bridge between video technology and IP, and it’s delivering excellent results for school administrators.”

“Today, technology is a foundational component of any security plan,” McLaughlin adds. “ASG and our other partners have made it much easier for our administrators to help maintain a safe environment at our schools.”