This was among the strongest showings ever for SSI’s Installer and Integrated Installation of the Year Awards. Read about the winners in the July issue of SSI and browse the Best of the Best to read about more runners-up.

The Castle was built in Rochester, Minn., in 1915 and served as the city’s armory until 1978 when it was renovated into a three-story complex to house the Rochester Senior Citizen Center. Four decades after that, upon the Senior Center’s move, Castle Community LLC submitted a proposal to the city to transform its building into an arts and culture community center.

It’s only fitting that another local institution approached the investors shortly after the building’s sale about providing security and life-safety systems. Custom Alarm, which has served the Rochester community since its founding in 1968, had provided services for the previous tenant, but it was determined this transformed space would need some advanced or newer forms of security innovation, notes Custom CEO Melissa Brinkman.

Custom Alarm first needed to work with the general contractor on a new fire alarm system that would meet today’s standards and fire codes, she says. “The challenge for this project was putting together a functioning system in a building that was listed on the National Register of Historic Places in the state,” Brinkman notes.

The system monitors all sprinkler points and ties in HVAC automation controls, new kitchen hoods, door holds and more than 50 notification devices, which alert occupants for a general evacuation signal.

Additionally, Custom met with the stakeholders to demonstrate how Alarm.com Business Solutions for security could track unique activity patterns and send alerts or notifications, and from an intuitive user interface allow the building’s smaller business tenants like its restaurant and book/record shop, to manage systems remotely.

Another key selling point was the ability to control access to the different floors and areas from the same app, including keyfobs for the rotating artists in residence. 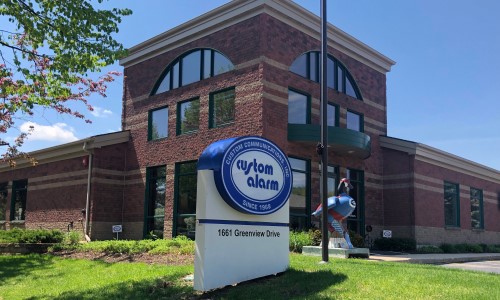 Custom installed two video systems; one for building owners to control and manage common areas, plus a separate system for the restaurant, whose owner “is extremely satisfied with the system and that he has the ability to remotely view various points in his restaurant and bar, which is important to him to ensure his employees are delivering elite customer service,” says Clig.