Twenty years is quite a chunk of time, capacious enough for some life experiences to seem distant as memories of them fade, blur. Then there are those moments in time that mark us forever, and two decades bygone still feels like yesterday. The attacks on Sept. 11, 2001, are such a moment.

Within the electronic security and fire/life-safety industry, 9/11 is especially poignant given the professionals who ply the trade endeavor to protect lives and property day in and day out. Not to mention their oftentimes close partnerships and affiliations with members of the first responder and law enforcement communities.

No, it does not feel like 20 years has passed since that fateful day, one we all share in common. Yet there is much to reflect upon in that time to better understand the lasting impacts of 9/11 that continue to reverberate across the security ecosystem.

To that end, SSI spoke with several industry professionals with particular subject matter expertise to examine lessons learned, progress made and the road yet to travel. The topics highlight the federal government’s expedient work to create standards around the development and deployment of technologies, adoption challenges, and opportunities. 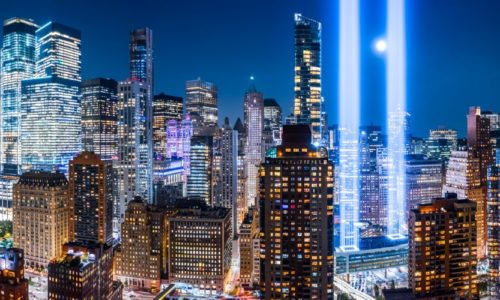 Related: From the Archives: 9/11 Hero Tells Tale of Losses, Lessons

The blunt effect of the September 11 attacks would forever alter the United States, its culture and not the least of which, the nation’s approach to security. By November 2002 the Bush administration had already created the Department of Homeland Security (DHS), and with the issuance of Homeland Security Presidential Directives such as HSPD-12, the security industry experienced unprecedented growth with government agencies’ procurement of products and services.

Both industry and government recognized the need for change in technology and processes to facilitate the urgent needs of the nation, explains Lynn de Seve, founder and president of GSA Schedules, an Annapolis, Md.-based government contract consulting firm.

“We immediately saw significant changes in technology and government regulations meant to tighten and secure public and government facilities through hardened physical security and new specifications for identity management,” she says.

The pace of the nation’s transformation in creating new security infrastructure may have been viewed as dizzying in the immediate years following the attacks. There were many situations of potential security concerns to address related to air travel, transportation, schools, military bases and other government centers in this national crisis.

“There was a successful and growing partnership that has continued between government and industry to keep us safer as technology was advanced and new regulations were implemented,” de Seve says. 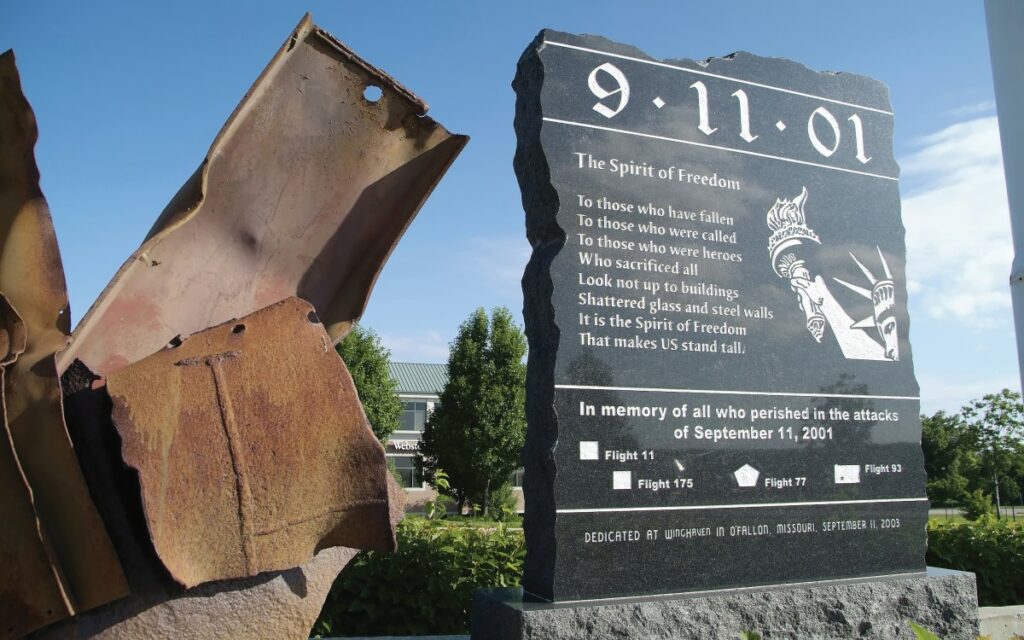 To never forget the gravity of the 9/11 attacks and commemorate the lives lost and heroes that emerged amid the tragedy, memorials like this one in O’Fallon, Mo., have been erected and dedicated throughout America. (Image: Wirestock – stock.adobe.com)

In a post-9/11 world, including other terrorist attacks that followed, the security industry underwent major changes, first in mindset and threat assessment, then in technology, says Ronald Hawkins, director of industry relations for the Security Industry Association (SIA).

Security systems, it was quickly realized, had to take on a broader role and defend not only against criminals seeking money or property, but also against well-trained and well-funded nonstate actors pursuing political ends through violent means. Hawkins explains this produced a dramatic upscaling of solutions, with perimeters hardened, devices integrated, functionalities enhanced, and everything connected online to allow for new analytics, remote access and, overall, a massive increase in situational awareness.

“In addition, the recognition of these new threats highlighted the importance of partnerships, leading the industry to forge closer ties with first responders, as well as with the DHS, the Department of Defense and other components of the federal government,” he adds.

The events of 9/11 in particular drove increasing demand for video surveillance equipment, not only in the U.S., but in other countries as well. Video surveillance was regarded by governments as a cost-effective and visible method of increasing security at possible terrorist targets, says Jon Cropley, a principal analyst with U.K.-based market research firm Novaira Insights.

Some security cameras were already installed in Manhattan at the time of the 9/11 attacks and had the twin towers and surrounding areas in their field of view. Still, Cropley says, these did not yield useful footage.

In contrast, nearly 12 years later, surveillance cameras with improved resolution and image quality witnessed the Boston Marathon bombing and proved critical in piecing together what happened. It is the market for video analytics software that was especially driven by government investment following the 9/11.

“Many video analytics startups emerged, some with connections to higher education facilities, many of them dependent on government funding,” says Cropley. “At the time, most observers expected that video analytics would revolutionize the market for video surveillance equipment.” 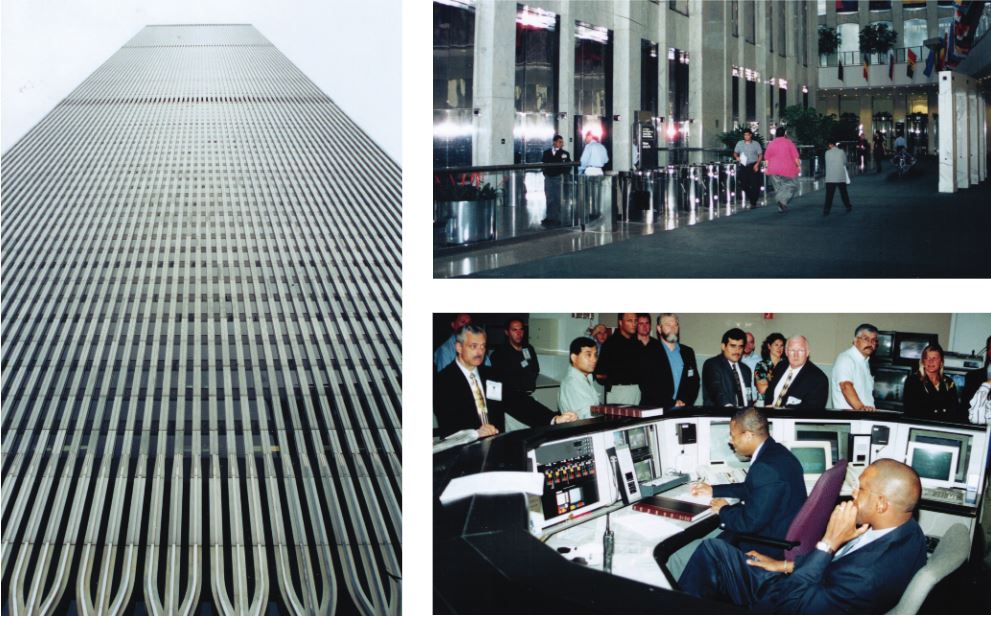 Yet, development of the technology was not straightforward and would need to overcome many obstacles in the ensuing years. The two decades since 9/11 have witnessed an evolution in the use of video analytics rather than a revolution, Cropley suggests. “Nevertheless, Novaira Insights estimates that 47% of all network cameras sold globally in 2021 will feature embedded video analytics functionality,” he says. “Additionally, 16% will feature deep learning-based video analytics this year and this percentage will grow to over 50% in 2025.”

As he reflects on the impact of 9/11 on security and specifically identity management and electronic access control, Lee Odess, founder and CEO of consulting firm Group337, says it’s hard not to consider it one of four major events in our history to have undeniable influence. The other three events are the Lockerbie bombing, the introduction of the iPhone and now the COVID pandemic.

“All of these have and will continue to make a lasting impact that, like an iceberg, gradually reshape the industry over time,” he says. Odess, a former executive who spent brief tenures with Brivo, UniKey Technologies and Allegion, cites some of the increased security practices and products that have stuck since 9/11 are the use of metal detectors, increased physical barriers, camera and surveillance technology, such as license plate recognition (LPR), aerial drones, motion sensors and thermal imaging.

“Specific to identity and access control, the impacts are now felt in the lobby of commercial buildings and enterprises with the check-in process at moving from business cards to the use of driver licenses or passports as identification,” he says. “There is also a higher level of investment into artificial intelligence, the use of smart cards, and an increased acceptance of biometrics that can 100% be tied back to the government investment into the public and private sector on these solutions.”

As an industry, Odess says, this is why stakeholders need to reflect, document and discuss the past, as well as be far more aware of the seminal events of the industry’s history to understand the future. “I, for one, can sometimes conflate the speed of change with the influence these events have on today and tomorrow,” he adds, “but when you step back and look over the 20 years since 9/11, we have moved way beyond where we were before it.”

The post Standing Strong 20 Years On: Industry Pros Reflect on 9/11 & How It Changed Security appeared first on Security Sales & Integration.