Ah, the analog days were much simpler ones when it came to specifying video surveillance solutions. The migration to IP cameras, which seems like a million years ago to some systems integrators (SIs), has paved the way for an onslaught of options.

The introductions of megapixel and high-def cameras, inclusive of the latest in multisensor cameras and 4K imaging offerings, have presented a host of new opportunities for SIs — and new applications for their end–user customers, as well.

They’ve become much more affordable in recent years and, therefore, more attractive, as they produce unprecedented detail at greater distances without the pixelation inherent to lower video quality. Some provide facial details from up to 60 feet away in daylight, and allow an incredible amount of digital zoom.

Yes, we surely have come a long way from the analog days. But keeping up with all of the technological advancements hitting the market can be daunting, as can be knowing which solution is truly best for each individual end user. 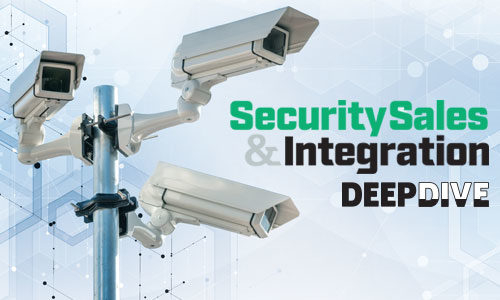 Here, experts from some industry-leading video surveillance manufacturers share their insights on those advancements and how SIs can leverage the opportunities that come along with them.

Most customers have had multiple megapixels on cameras for a while now, but now people are thinking about implementing 4K for higher-end uses, notes Ross White, product manager, Johnson Controls.

“In some cases, there are companies selling 100–megapixel cameras, mostly for government use and not commercial,” he adds. “One of the issues with 4K is that it takes a lot of processing power when used in multisensor cameras. It’s difficult to maintain high frame rates with up to four sensors on multisensor cameras. However, as more powerful processors are utilized in cameras and the costs of those processors are driven down, I think we’ll see this market grow. You’ll also see more artificial intelligence running on the cameras, and this will bring with it an increase in frame rates on 4Ks as well.”

Senior Technologist at Axis Communications Ryan Zatolokin says that when his company released its first 4K camera approximately six years ago, it provided good picture quality and resolution, but there were challenges in low-light conditions.

“As with any technology, things evolve. Cameras now do great with low light and bandwidth, things that were initially concerns because they were dealing with a lot more pixels. Technology has come a long way.”

The biggest change that Aaron Saks, product and technical manager at Hanwha Techwin America, sees is the evolution of higher quality components.

“HD megapixels have been around for 10+ years, but it was expensive and difficult to look at the supply chain on the product. Now they’re commonplace. We’re seeing a focus on the sensor, the lens, the IR and the software, and a ramping up of the quality and components to be higher end.”

As far as multisensor cameras, they have multiple independent sensors and the latest models have the ability to be remotely focused and repositioned, Zatolokin adds, stating that we now have more and more options in terms of how the technology can be used to solve different use cases for end users.

Saks echoes this, noting that the latest trend is putting AI into the mainstream and enabling the video analytics to perform much better with eliminating false positives and bringing that onto megapixel cameras. “In 2020, we’re seeing it coming into the mainstream, Any and all cameras can have AI and users can use it effectively.” 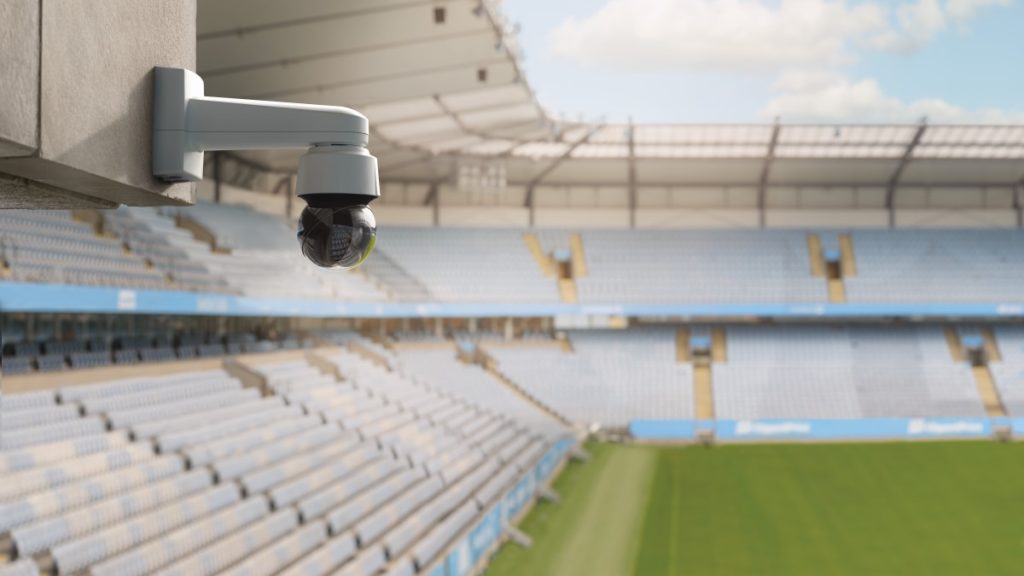 The high-resolution of 4K cameras allow for image quality to be maintained when digitally zooming, which is especially helpful in big, open areas such as stadiums. (Image courtesy of Axis Communications)

The higher the resolution, the more details are captured. Details that sometimes may go amiss when viewed with typical cameras or even the human eye, such as the denomination of the bill that a cashier accepts or gives back, or the license plate of the suspected getaway car from a nearby robbery, notes Tin Eng, camera product manager, Speco.

“Some end users feel they don’t have a need for 4K as their viewing screen may only be HD or 1080p,” he says. “But we all know that if you digitally zoom into a 2MP image, you will start to see pixelation and lose the details of the scene. With 4K, you can retain the high-level of detail when digitally zooming in.”

“From my experience working in surveillance, the primary place for 4K is still in forensic work,” White says. “If you provide lower end workstations for security guards or at a monitoring station, they can’t gain anything by looking at a 4K stream on a 1080p monitor. However, 4K excels in forensics where the video is recorded in high definition and you’ll want to zoom in afterwards and find a person after the fact. Users need to determine what the camera will be used for and evaluate the benefits and costs.”

Saks concurs that it’s important to define what the end user’s security goal is for the cameras, and to keep in mind that additional bandwidth and storage is needed. It’s important to choose the right feature sets to reduce storage so that 4K is manageable.

The advancements in megapixel and HD cameras can translate into new opportunities for security dealers and systems integrators. “From a sales perspective, it’s a good opportunity to strike up a conversation, to discuss options and evaluate end user needs,” White observes. “There are situations when a lower resolution device is more advantageous and the salesperson needs to be knowledgeable and ready to have a candid conversation about what type of technology is appropriate for the application.”

High–resolution cameras can now be used in places where they previously couldn’t, Zatolokin says. “Users can now see details about what’s going on that they didn’t previously have the ability to without a ton of cameras. Advancements like that are very powerful. And, with technology maturing over time, the price has become much more reasonable,” he notes. 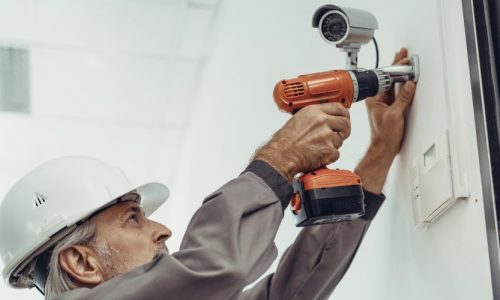 Related: Think Value, Not Megapixels: How to Sell Your HD Surveillance Cameras

White raises a good point, mentioning that SIs should be mindful of the fact that while some people see higher resolution as better quality, outside of forensic work, higher resolution doesn’t necessarily mean that you are capturing superior video.

“Someone who owns a large office or parking area and is concerned with finding details at night or in a dark space will find it harder with a higher resolution camera. The very physics of the sensors dictate you get better low-light and night images from lower resolution cameras. Most sensors are roughly the same size, but if you divide that area into a million more pixels it means each individual pixel is smaller. The smaller surface area of each pixel can’t gather as much light.”

He also cautions that with higher resolutions, there is more data created, which requires greater storage needs. However, this does present an opportunity to increase sales on larger storage solutions for longer storage times.

Advancements in higher resolution cameras will ultimately provide increased confidence in identifying details in a scene, which can be crucial when submitted as evidence in a court of law, Eng adds.

“This AI and other forms of ‘recognition’ coupled with higher resolution will automate many forms of surveillance. Being able to automatically recognize a face or license plate and pair it with access control or a gate essentially provides another level of security.”

Higher resolution means more pixels per foot on your scene. These cameras are better for AI to recognize faces or objects, White points out, but you need to be able to balance the large amounts of data you are sending over your network to process.

“Throwing 4K video streams to your AI system is a much heavier lift and users will be spending a lot more on processing power, though as processors grow faster and cheaper, AI will continue to grow and you’ll see bigger brains on the cameras.”

As technology prices drop and efficiencies of scale increase, White predicts the adoption of high-resolution devices into consumer markets will grow, possibly even into the residential market, depending on what people are looking to spend. And that overall, we’ll see a higher rate of adoption for these cameras.

Saks advises integrators that are servicing a facility with 50 cameras, for instance, where going to 4K could reduce the cameras count and in turn reduce RMR, to flip it by offering a service plan. Although there would be fewer cameras, they’d be more critical, and SIs can service them by making sure the cameras are focused, and all are working properly.

“Having a trusted integrator partner is so critical to make sure all is running right. SIs need to explain to their end users why it’s important and sell service contracts to make sure the equipment is doing its job to help the organization.”

When you have higher resolutions, you’ve got more data to store, which means users will have a higher need for storage space. “Increasing how much data that’s being created also mean users will need a bigger server,” White explains.

Integrators, he says, can upsell on the servers, as well as make more maintenance calls and hardware replacement plans. “It depends on the need. If, for example, you’re dealing with a casino that needs to see someone stealing chips or dealing cards, being able to zoom in and see details is important and will provide a high level of ROI.” 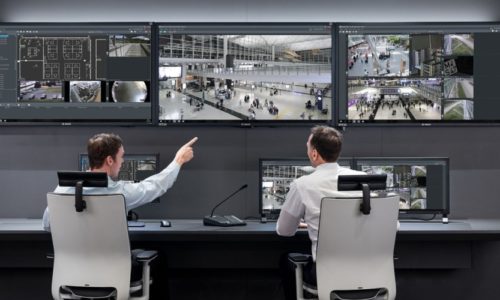 Zatolokin believes there isn’t a gigantic challenge in terms of new things to learn when deploying higher resolution cameras. There are some great tools to make it easier to deploy, he says, and they provide a lot more information than they could before, including analytics. They have more processing power at the edge and are very easy to set up.

It is important, though for SIs, as we’re going to higher resolutions and more power over Ethernet, Cat–6, Cat–6A, to make sure they’re running the right type of cable to future-proof.

To be ready for new PoE standards, SIs should, Saks advises, take advantage of education resources to keep up with these changes. He recommends Building Industry Consulting Service Int’l as a great source for keeping up with those standards.

Experts say today’s increased amount of data generated from high definition video is helping enable AI in surveillance. According to White, a key consideration is balancing surveillance needs with providing enough information to the AI engine to yield good results, yet not overwhelming it with the task of processing data.

For example, if you want to use cameras to perform real-time facial recognition you might need a server that costs several thousands of dollars. If you start increasing data and moving to 4K cameras, your need for processing power will grow.

Most manufacturers and software suppliers are good with providing the right cameras to use to achieve the best results. It benefits them to ensure the end user achieves desired results versus being unhappy later.

More analytics are moving to an AI scenario, not just pixel data. Users are seeking to better harness the intelligence that can be derived via data so as to be smarter responding to events.

Erin Harrington has 20+ years of editorial, marketing and PR experience within the security industry.