MONTREAL — Barry Paisley, a regional manager for Hikvision Canada, rode his motorcycle in the recent Kinsmen Ride for a Lifetime, a fundraiser for the Kids Cancer Care Foundation of Alberta (KCCFA).

Held June 21-23, Paisley raised CAD $2,500 and in the process exceeded his fundraising goal by 250%, according to an announcement.

This was the 17th annual Kinsmen Ride for a Lifetime, during which participants spent three days on their motorcycles riding up to 310 miles per day. This year’s route took riders through Banff, Canada, along Highway 1 and 1A, and south on Highway 93 through Alberta and British Columbia.

“I participate in the Ride for a Lifetime every year because I am passionate about its cause. All funds raised go to KCCFA and their Camp Kindle program. The camp gives kids and families who are fighting or have fought cancer a chance to get away from hospitals and doctors, to relax and be kids instead of patients,” says Paisley.

KCCFA supports children and families affected by childhood cancer through funding and other programs. Last year, Ride for a Lifetime participants raised CAD $170,000 for the foundation. To date, the 2019 event raised CAD $155,000.

“Corporate social responsibility is an important Hikvision value. Team members like Barry do a great job leading the way and garnering support from other Hikvision employees when they participate in important fundraising events, like the Ride of a Lifetime,” says Marianne Chew, Hikvision director of marketing. She adds that the company has sponsored several events in the past year across North America with participation from employees in Canada and the U.S. 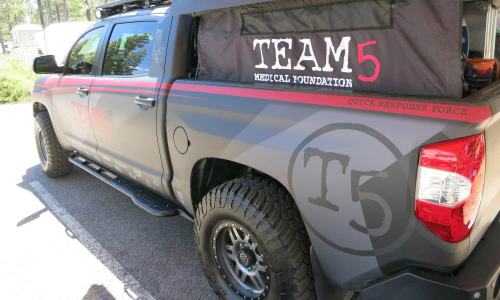 Hikvision North America team members took part in several Mission 500 events, a non-profit that works with the security industry to serve the needs of children and communities in crisis. Employees from the company attended the Mission 500 Puerto Rico service trip in November 2018 where they helped victims of Hurricane Maria rebuild their homes; a December 2018 kit building event for Title 1 school children in East Hartford, Conn.; and the February 2019 Hockey Classic in Toronto.

The company also sponsored a table for the annual Starlight Canada Children’s Foundation Gala for the second year in a row, which took place in Toronto this year on March 23, 2019.